Dutchtastic said:
So nobody will ever win in the Toyota since they will just break down constantly.
Click to expand...

And the one Toyota that makes the finish will be behind LMP2s
Breaker of video games, and quite possibly slower than James May...

jamesl91 said:
what laptimes are you doing?
Click to expand...

I drive the Marek and my quali pace is a low 1:36 and racepace around 3:37:00 consistently. Did almost two simulations and crashed in neither of them.

Can someone make sure none of the cars have a Renault or Honda engine before the race starts? Don't want any breakdowns happening
Breaker of video games, and quite possibly slower than James May...

Amazing time!
But it won't help, since shortcutting over the Bugatti Circuit is stricktly forbidden!

Unfortunately I've been sick all day, food poisoning I think. So I won't be attending tonight :-(
More spins than a certain (ex)Ferrari driver

Ah @t0daY is my livery in the pack aswell, can't seem to find it?

In Qualifying my game already crashed after i drove what would have been the 2. fastest gte time on our server. I came back and starteed in last place (the race is 2.4 hours long so whatever right?) and the game crashed again on the grid. Luckily for me the guys agreed to restart the race because one person droped aswell. Again a big thank you for doing that! It didn't last long through and PCars crashed again about 10 secs into the formation lap.
I hope the rest of the guys had fun driving

In case anyone of you knows a solution to the "unhandled exception error" please let me know!

I guess I will reinstall my pc in a few days to maybe fix it that way lets see. See you guys hopefully at next years 24h le mans in PCars2

sorry guys, i retired and watched the race since lap 8. In Lap 20 i get a failure and the game crashed. I don't leave the server by my own, hope that this crash did not lead to a gamelag 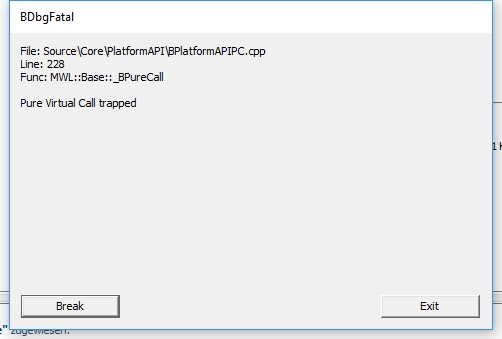 TheDoctor46 said:
Theres a small chance I wont make it in time for the qualifying. Stupid real life But I'll try my best to make it... can't miss that classic of motorsport
Click to expand...

Man I'm still kinda pissed right know, but after I finally managed to be there on time and Q'ing successfully, my ISP betrayed me... I hate 'em

Apparently my glasses are too big for wearing the rift comfortably over longer times even though they are smaller than what oculus says is alright.

Had to retire because it actually became painful. too bad, wanted to at least bring the car home even though my lap times were abyssmal.

Sorry guys, my internet providers decided to do line maintenance tonight of all nights and my internet cut out on lap 14 I was relatively annoyed anyway due to the car spinning out for no apparent reason when exiting corners. Must have been my setup or something as everyone else had no problems.

And I think we really should do a rematch for Lobby B and C drivers since we really prepared a long time for this event, only to run half of it and then disconnect
Last edited: Jul 16, 2017
Offence is the best defense

I'm exhausted, Bullett made me work my arse off for that. I'd be ecstatic if I wasn't dead. Thanks everyone, proper write up coming tomorrow...
About RSR | General Conduct | Driving Standards​

Btw what tire pressures were the other Aston guys running during the night? I just couldn't get any temp in my fronts.

Thought I'd at least give a more detailed account for my sudden departure during Lobby A qualifying yesterday.

During the week, I started to have problems with my Oculus Rift disconnecting - something was resetting on the USB side of things as I could hear the characteristic Windows 'device disconnected, device connected' sound playing. Having already disabled all USB power management in the past, I wasn't sure why this would suddenly be going wrong (I've not had this happen to me in all the years I've owned my Rift). As the days went by, I learned that it could do it within 20 or 30 seconds of getting on the track, or 2 hours, it was truly random. Anyway, to cut a long story short, I had exhausted all of my knowledge of what might be the cause but, having spent a couple of hours in a practice lobby on Saturday night and, then, a further 2 hours yesterday before the race, I felt confident the problem was resolved.

1 minute into my first qualifying lap (after the outlap was completed) and it reset.

Although I obviously had plenty of time to leave the session and re-join, I couldn't risk destroying other people's races - when it disconnects, the Rift display goes completely black and, after a few seconds, the monitor mirrored display re-appears, during which time I obviously have no real control of my car.

To say I was frustrated would be an understatement so I would like to apologise for my abrupt departure - I immediately shut down pCARS, TeamSpeak and my PC (only to find, this morning, that my PC had immediately switched itself back on) and had a relaxing evening watching DVDs instead.

It seems that Le Mans and myself are destined to never get on . Last year's race RSR race was a disaster for me, I had multiple disconnects in the iRacing 24hr race and now this


Reading through the reports, it looks like I wasn't the only unlucky one so I can only sympathise with others who had problems last night.
Last edited: Jul 17, 2017
#WorldsFastestChicken

Welcome to technical issues, just when you think you have them under control, they rear their ugly head again.
At least you didn't take down half a lobby with you like what happened with lobby B, sucked because I was having some fun catching up after I binned it on lap 3/4. I'm waiting for the cross-lobby results though, will be interesting to see where I ended up

EDIT: Looking at ShadowPlay footage from my point of view, it was @frankodrose leaving/disconnecting which broke the server for us. Things happen, I know, guess I was just one of the lucky ones to survive. ¯\_(ツ)_/¯
Last edited: Jul 17, 2017
Breaker of video games, and quite possibly slower than James May...

Ah well, that was an unfortunate series of events. I qualified in P1 well ahead (1.5-2secs I believe) in GTE for lobby B with a mid 3:55 I think. I threw away my final quali lap too that was .400 up. After a perfect start I immediately began pulling away from the pack and by night time came I was over 14secs ahead (I think).

Everything was going to plan, I've never felt so comfortable and confident in a setup and car and my 1500km+ of practice was paying off. I put in my quickest lap of the race within my first short stint, 3:55.841 which I was happy with but knew I could do better when day broke.

...and then the mass disconnect started happening. About mid way through the night an LMP1 who had just overtaken me through the Dunlop chicane had their game crash and they spun right in front of me. With no where to go I hit them dead on at high speed leaving me with damage. I drove the rest of the lap and pitted for only repair which messed up my tyre pressures for night driving terribly so I was on ice for the remainder of the stint, but felt compelled to finish the stint in order to be ok on fuel numbers.

This decision cost me minutes and minutes of time. By the time day broke and I was back on day pressures with a fuel tank of fuel till the end I was back at it but the damage was done. Not only was there only 10 people left in the lobby with only 6 actually still racing, any hope of competing across lobbies was dashed with the time I had lost from the one little contact.

In the end I had to retire on lap 30 as I ran out of time and had to go to work. Woke up at 2:45am, raced, worked for 8hrs and here I am writing. The Aussie sim-racer life.

In hindsight I probably should have asked to be put in lobby A as my pace was very similar to the likes of Battenberg which would have resulted in some great battling but I can understand the powers that be putting me in lobby B after my Revolution Cup performance.

It's such a shame as I felt so strong with the car, track and setup and really felt for the first time in a long time I could have taken the win across all lobbies in class but it wasn't to be so. Was great fun regardless and most of all a confidence building experience, knowing the old Sausage still has his moments of greatness.