I’m sorry but this game has pretty much broken me now.

i’m most like going to be withdrawing from the rest of the season 3, it’s a real shame but this game is not to a build standard that is acceptable for large multiplayer events, the first two events have been plagued with joining issues and server crashes causing the sessions to be understandably delayed but running past the scheduled time significantly, which makes participation unfeasable.

Adding to this my instability in VR when losing window focus and the game crashes when transitioning from race to menu make playing the game a fun sapping experience.

This game has a lot of promise, but these type of issues just spoil the whole experience and leave a bad taste in the mouth, I’ve been trying to look past these issues for the past month or so, really trying to work through the problems to enjoy the racing with all the guys in RSR as we did in PCars but trying to play a game shouldn’t be an exercise of banging your head against the wall continually and not moving forward.

We invest hours and hours of practice for a race only to have such an array of problems and this does not sit well with me,until such time that these type of issues are resolved I can’t logically justify making the commitment to try and race.

I really hope SMS can make these multiplayer events a more stable experience in the future and crush many of the bugs that are ruining it at the moment. :~(

That was by far and away the worst race I've had on rsr. I'm going to review the footage and calm down before I blame myself/anyone else for the 2 bits of contact I had. The car was Soooooo slow down the straight and I don't know why.

Handling was shocking, my fault yes but so frustrating. I retired after the biggest spin and crash.

Upset. Feel like I would have done better if it wasn't for the game issues which meant I wasn't in the zone at all.
More spins than a certain (ex)Ferrari driver

I can only apologise for that incident in turn 1 lap two, locked up & trying to avoid hitting @Ashnoom went on the grass, I became a passenger affecting 3 other peoples races
Managed to get around the lap to pit before blowing the engine, after that it was a recovery drive to the finish. A few spins towards the end handed @steveg200 9th place otherwise me & @Shepard would've come in line astern. Congrats mate.
Thank you to all for waiting on my trying to find the server after the initial restart. Not that we got far with it haha.
CPU: AMD Ryzen 5 2600X | Cooler: NZXT Kraken X62 | MBO: Asus X470-F Gaming | GPU: Asus RTX 2070 | RAM: 32GB HyperX Predator RGB 3200MHz | M.2: WD SN750 |SSD: HyperX 250GB & Samsung 850 EVO 250GB | HDD: WD Black 1TB |Monitor: Asus PG348Q 100 Hz | Headset: Steelseries H Wireless | Mouse: Razer Mamba | Keyboard: Razer Blackwidow Stealth Chroma | Mousepad: Razer Megasoma 2 | OS: Win 10 Pro 64 | Gameplay resolution: 3440 x 1440 | Graphic details ingame: All the Details | Controller GOAT: Razer Raiju

Will write more tomorrow... BUT:

THEY DIDN'T CHANGE MY TIRES!

I looked into the ICM one Lap before the Pitstop and it looked like this (this picture is from after the Pit Stop though): 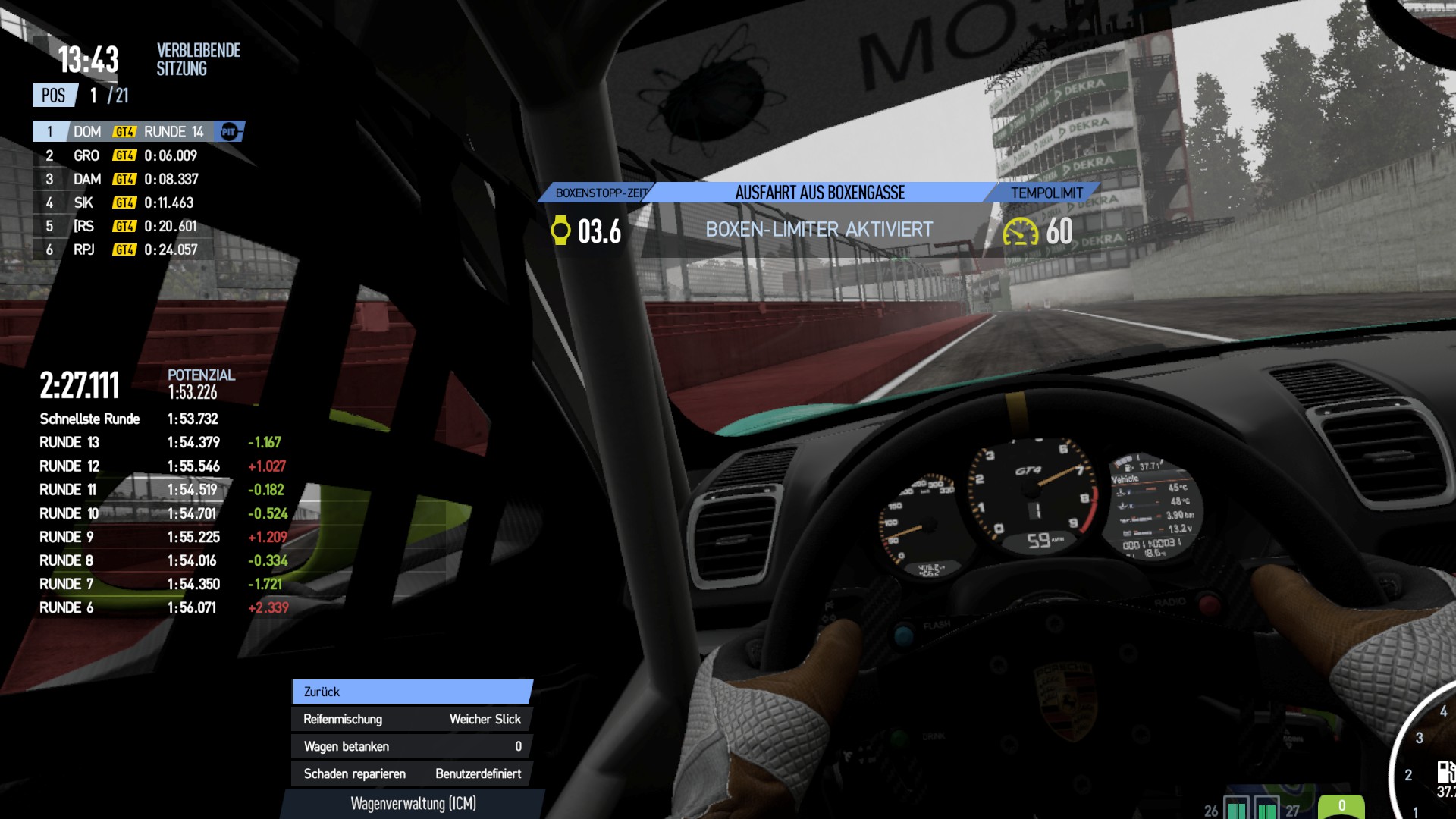 Also the correct Pitstrategy was loaded. So i only had a 3.6s Pit Stop. Don't know what happened in this time... Didn't had damage. Anyway i checked what a normal Tire Change takes: 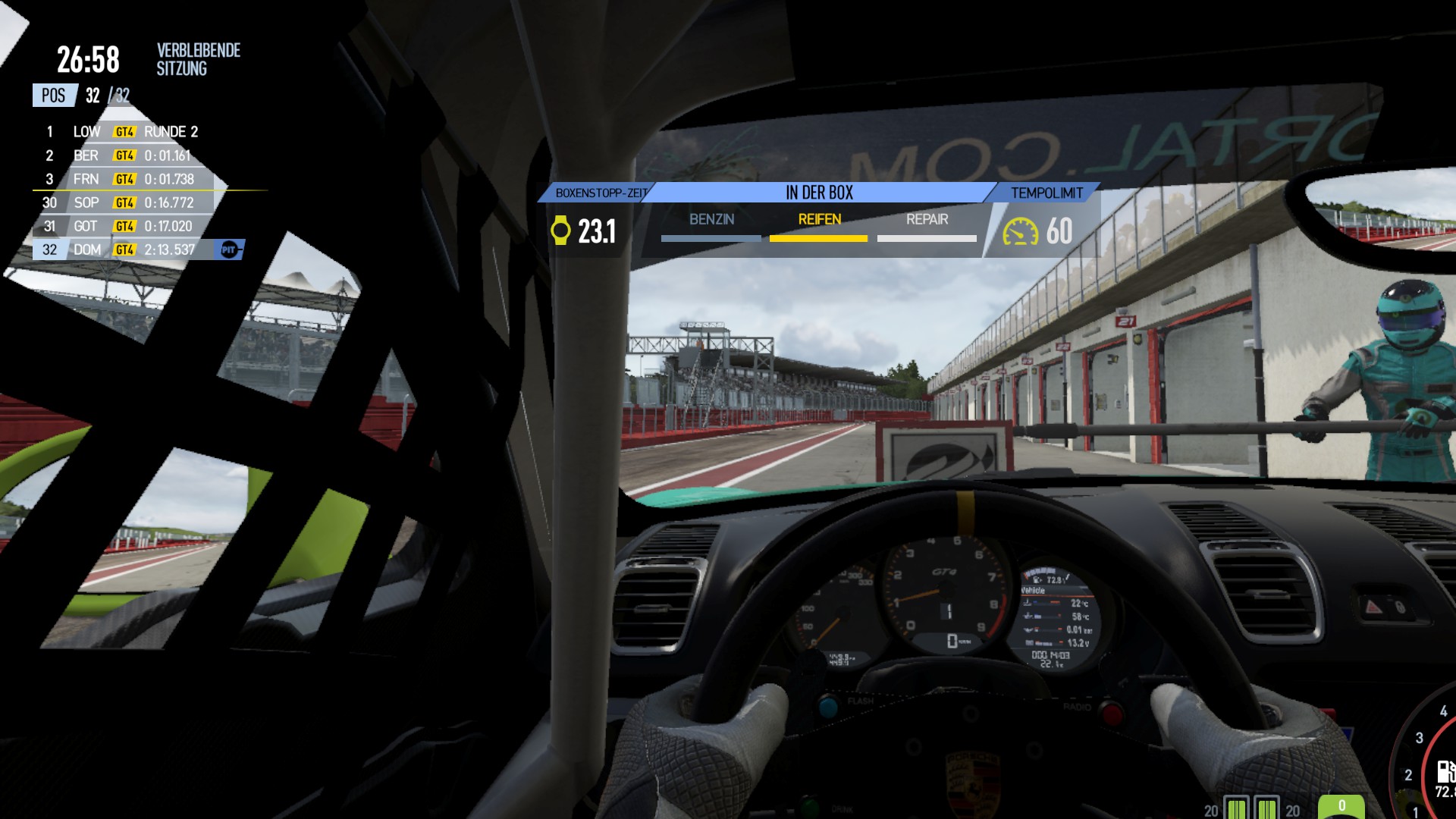 Around 23 seconds. I was 1 Second slower in average the last 6-7 Laps because worn out tires but anyway...
@t0daY @Darksi give me some penalty time, i don't want a 2nd place which i don't deserve.

Otherwise beside the Server Problems it was a great Race for me, i had no accident, no spinning, it was just amazing. I had just 1-2 heart stopping moments where the car was a bit loose on the end. But i was able to catch it everytime

Meh. Qualified 14th, finished 14th. Only because of inconsistency though. Worked my way up to seventh over the first few laps. Held that nicely (vaguely keeping up with race leaders) until a self-inflicted spin+damage at the final two corners. Long pit stop. Put me out with the race leaders. Was keeping in contention with them, too (sitting between 5th and 6th or thereabouts, but a lap down). Whoever was in 6th called blue waaay too early (I think), made me think I’d done something wrong, I lost my concentration and... off again. Meh. Easy top ten, possible top five, if it weren’t for those two incidents.

Oh, and I did my usual ‘yielding to people that weren’t actually lapping me’ trick as well. Let a couple sneak through when I was letting the leader lap me. I need to stop doing that!

Sorry for the issues getting the race to happen, by the way. Didn’t like seeing that happen. I can’t help but blame myself Dave.
Last edited: Oct 23, 2017

Was a nice race for me.
Started from the back due to the Q-Ban, has p13 after 4 minutes!!! But idiot Tom spun in the hair pin and had let all driver passed.
Finally i had P14 and.... déjà vu...again spin in the hair pin 3 minutes before end of the race and hat let darski pass. At the End i get P14. With 2 failures, start from the back...its not a bad result

Edit: but one not so funny point. IMO it make no sence to wait 10 minutes for drivers that can't join...sorry!!!!
But if 1 or 2 have problems, its not ok to letting the other 20 waiting. We start this time with 45 minutes delay. Ok...we had server problems, but also the waiting for member. I hope we can improve his procedure for the future.

Overall I noticed that at least 2 or 3 times per lap my ABS and TC was disabled and I needed to enable again. I really love all the features of pCars2 - not!
Last edited: Oct 23, 2017
"When you put your foot on the throttle, you could use the power instantly!"

Had the same issue as last time... car felt as if I was driving on ice... couldn't do 1 single lap without losing the car during qualifying. Car extremely unstable and unpredictable, losing the back especially in the first chicane. The race on the A*R server went much better, car had much more grip and had some great laps ...although 1.58 is still very much off pace... I'm getting better at it and 1.54 should be possible.
Where do I read about Q-bans and stuff before the race? Was surprized that teammate @Thomas Sikora wasn't in quali. Had him pass me a.s.a.p. after the start to give our team a better chance to gain some points..... but I gave so much room I lost 2 positions. Made it up to 17 I think for a couple of laps.... lost confidence in car during quali so never got into a flow... and being too tired to concentrate for 45 minutes I lost the car several times and blew the engine with 2m 35 seconds to go... Also had some eye sight issues... new pair of glasses but they put in the wrong strength for my right eye... hope to have that fixed in 2 weeks.....
Last edited: Oct 23, 2017
REAL LIFE IS OVERRATED
SIM racing experience (May 22nd 2020): 1121 hrs [893 hrs PCARS2, 228 hrs PCARS1].
Operating System: Windows 10 Home 64-bit CPU: Intel Core i7 6700 @ 3,4 GHz (max. turboboost - 4,0 GHz) SSD: Samsung Evo 860, 500GB HDD: Western Digital Blue 2TB RAM: 16 GB DDR3-1600 @ PC3-12800 MB/s Motherboard: Pegatron IPM17-00 Odense PSU: Corsair CX500m Graphics: Gigabyte GeForce GTX 1080 Mini ITX 8G My Rig: Fanatec ClubSport Wheel Base V2.5, Fanatec ClubSport Pedals V3 with Brake Performance Kit, Fanatec ClubSport Steering Wheel Formula V2 EU, Wheel Stand Pro Deluxe V2 Headset: Sennheiser G4ME Zero VR: Oculus Rift

The Breeze said:
Where do I read about Q-bans and stuff before the race?
Click to expand...

Here my video of the race at Imola!

I might turn off the traction control in the next race in two weeks. Thanks @FuBii for the help.

Freak Superman said:
I might turn off the traction control in the next race in two weeks. Thanks @FuBii for the help.
Click to expand...

You can adjust it’s level in your setup and ICM. It can be useful in some occasions so I’d play with that before turning it off completely.

SillySausage said:
You can adjust it’s level in your setup and ICM. It can be useful in some occasions so I’d play with that before turning it off completely.
Click to expand...

I will definitely do that first, @SillySausage.

I will try to lower my traction control in the next race. Thanks for the help guys

So we had all these connection issues…again…this is getting annoying, really. A scheduled race for 21:05 and we start at 21:55. This absolutely not acceptable, especially before a work day. But I won’t blame anyone @RSR.

Regarding the race, I really had a blast when it was finally running. Started P11 and was quite pumping in an adrenaline rush, as I did not want to mess it up in lap 1. I got through cleanly but had to let some people pass, as I was a bit slow after turn 2. After that I managed to stay in the pack for quite a while but at some point I was battling with @SirHunterOne and lost the car in the right hander before the hairpin. Gladly I didn’t pick up any damage and could continue straight away. I gained some places due to others crashing or spinning out. Then my teammate @FuBii came close from behind and I let him pass, as he normally is faster than me. Well not last night. In the double right hander uphill he spun out and I was ahead again. In the last few laps I was closing up on @Eugene Flerko , who was slowed down by some backmarkers. I was clearly faster on the straight but could not overtake him before T1. It was great racing there, at least for me. Eugene and I crossed the finish line in less than a half car length I think – Photo finish and P8 for me, which feels great.

EDIT
Photo finish - a tad more than half a length it was. 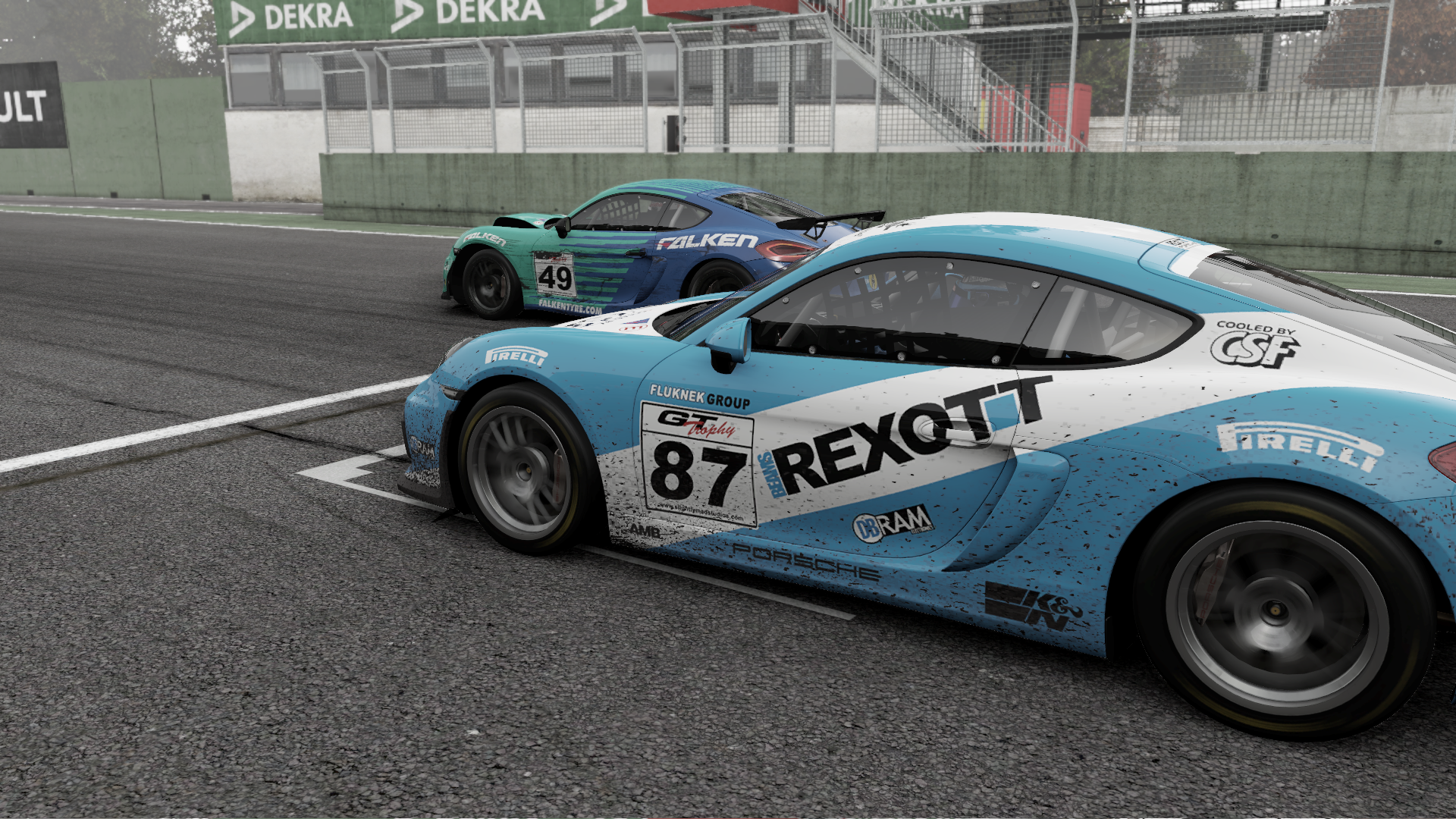