Hujkis said:
Awesome, thanks a LOT!
Click to expand...

Just so you know if you get into the 2.10s too now i will cry xD

Alex Salmon said:
Just so you know if you get into the 2.10s too now i will cry xD
Click to expand...

Oh, you don't need to worry about that

Sorry to hear that. My condolences. @Stitch

Gutted to miss this tonight, only just walked through the door and haven't even eaten yet. This is why I hate working for a living.

Looks good? Race was a huge let down after some one crashed into me at entry of Eau Rouge ... further despite running high wings, my car always snap oversteered in fast corners ... 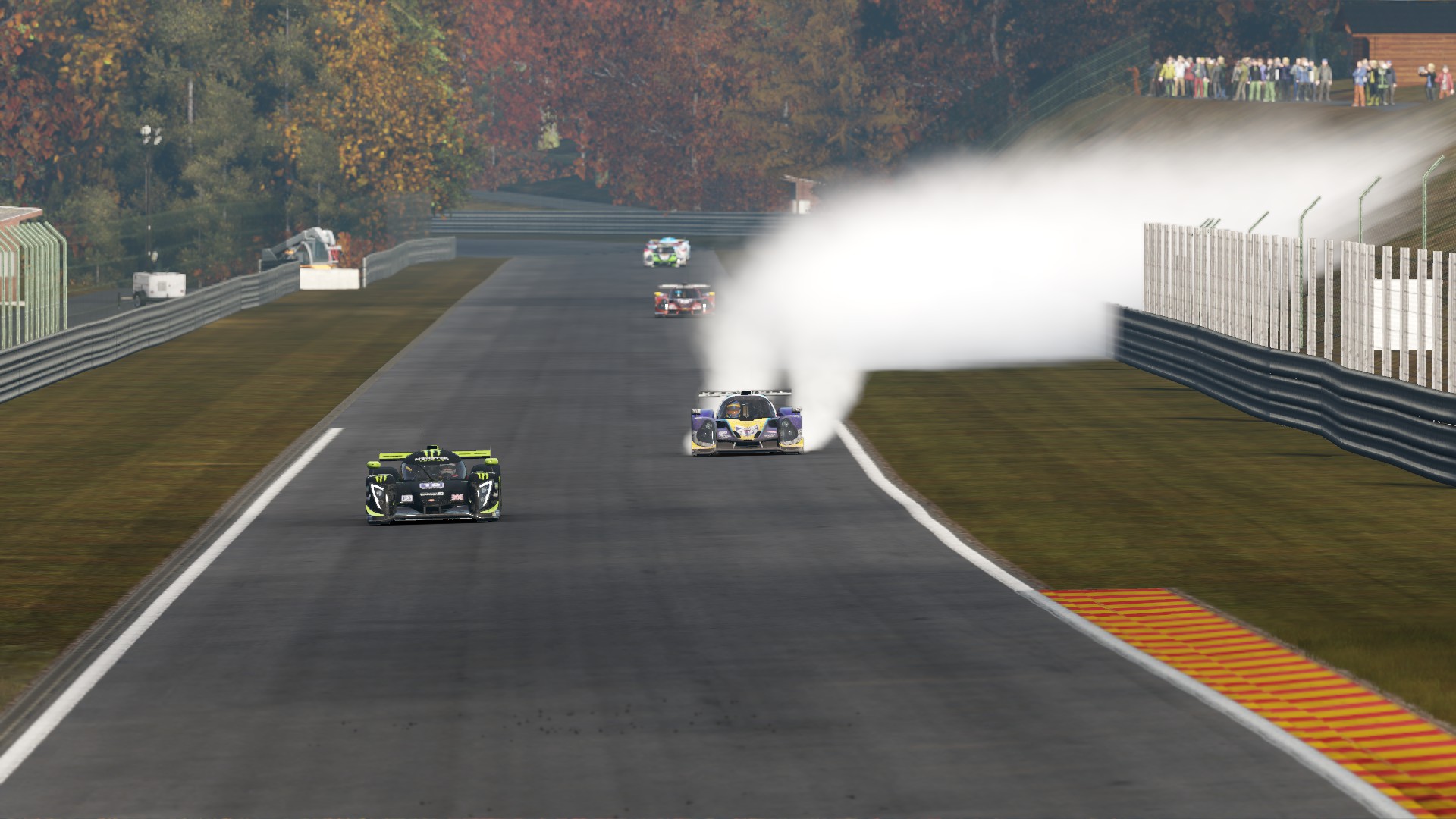 That was the Moment that destroyed my Race: 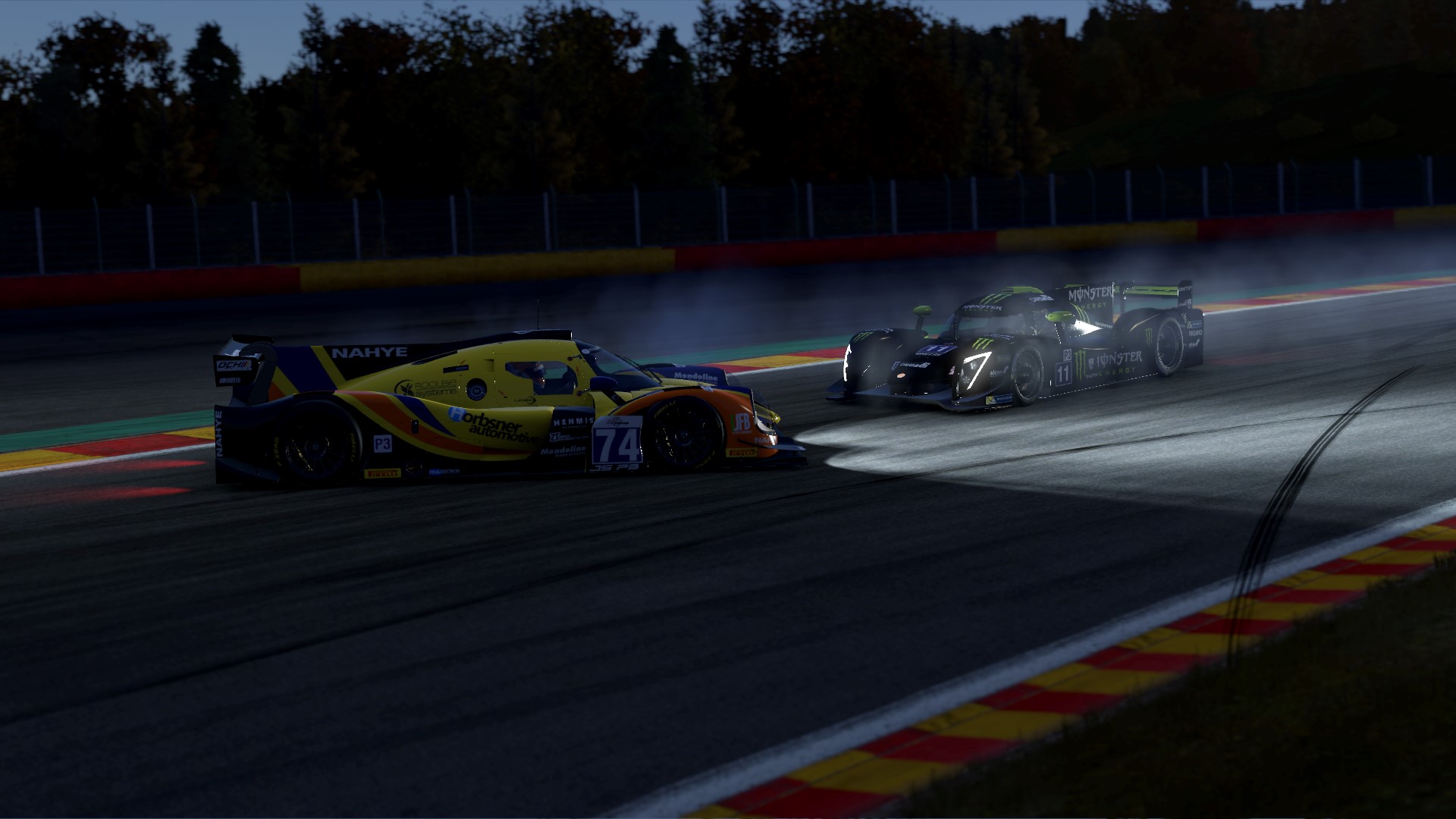 Sorry @FlyingKman Who crashed right into me at this Moment.
The small Touch at my Rear in Lap 2 was too much damage for my wing. Couldn't avoid it then... Spun out at Pouhon, i tried everything to go offtrack while spinning, but wasn't able to.

dominiczeth said:
That was the Moment that destroyed my Race:

Sorry @FlyingKman Who crashed right into me at this Moment.
The small Touch at my Rear in Lap 2 was too much damage for my wing. Couldn't avoid it then...

Did I hit you there? If so, I am very sorry for that - I can just remember that I tried to keep my line...
"When you put your foot on the throttle, you could use the power instantly!"

CrisBCros said:
Did I hit you there? If so, I am very sorry for that - I can just remember that I tried to keep my line...
Click to expand...

No you didn't hit me there. Someone hit me in Les Combes in the rear (don't know who) and because that my wing had some damage (i think 10%...?). I thought i can manage it to drive with a damage like that. I was wrong...

Soo, first proper race for me. First of all, I felt sooo bad for @Puffpirat , that was just not fair. If possible, I would have change places on grid with you. The car setup was perfect - must have been so much effort to get it right. Thank You for sharing, hope I'll be able to return the favor somehow someday.
For me, the race started fine. 4th on grid, clean start, managed to stay 4th after few laps. Than after some spinning, I was 2nd and it was like "now just keep consistent, competitive pace without spinning at you'll be fine". That's when my monitor just fell on my wheel. Managed to catch it, but crashed into the wall in the process This was ~15 mins into race and it pretty much ended it. @Puffpirat, you were not the only unlucky one

If I could share one observation (not complain), it's that there's way too much radio chatter. Especially from guys without PTT button. I kept hearing people's spotters, crying babies, disappointing sighs and all kinds of weird noises.

Problem is that PTT doesn't work in pC2. I hope that i setup my Microphone that way that no one could hear my Shiftings at least. Normally i have a button to mute my Teamspeak Microphone. But it just doesn't work ingame for me.

Strange. I've setup a button on my wheel to mute and activate the microphone in teamspeak. It works in windows and in any other game, but it doesn't work in pc2.

dominiczeth said:
Problem is that PTT doesn't work in pC2. I hope that i setup my Microphone that way that no one could hear my Shiftings at least. Normally i have a button to mute my Teamspeak Microphone. But it just doesn't work ingame for me.
Click to expand...

hmm, what I did is set PTT button in teamspeak than unmapped that wheel button in PCars2. Seems to work well for me

Already done the same. maybe it's because VR Mode..?

Mmh, maybe the button you want to use is hardcoded in PCars2. I had a similar problem with my Manettino dial, where TC was switched on/off although I mapped it to another button. I could solve this by setting up a custom wheel profile.
Member of WMD 1 & 2
Ryzen 5 2600x | Arctic Freezer 33 Plus | Gigabyte X470 AORUS Ultra Gaming | GIGABYTE GeForce GTX 1060 G1 Gaming 6G | 16GB G.SKILL RIPJAWS V 3200 | Fanatec CSL Elite Wheel Base + CSL Elite McLaren GT3 + Fanatec Clubsport V3 | Thrustmaster TH8A Shifter - Windows 10 x64

That was a bitter pill to swallow but, sadly too late, I managed to find a steam setting on my end that was causing the problem.

Under steam -> settings -> ingame on the bottom is something called maximum pings per minute. Strangely this defaulted to 1000 for me while checking with Manu and Ramiboo it was 5000 default for them. Seems my PC was unable to ping the server, increasing the value made the RSR server show up for me.

Let's hope this never happens again for no one Well I hope you guys had fun, at least my setup won
S

First podium in RSR! I started sim racing exactly a year ago and what an achievement this is for me

I could not get the right lap on the qualifying so started 6th. As this was quite a long race, i was aiming for as clean as possible start. So after a couple laps in the race i was 9th.. Then people started to spin out, crash out in front of me (46:56, 47:26, 51:27) and 17 minutes in to the race i was already in 2nd place. Gap to @t0daY was big and knowing his pace, i did not had much hope to catch him. Half in the race i decided to pit for mandatory pit stop and my back end slipped entering pits under ~30% of brake power (1:09:26).. Strange, did not expect that at all. t0day also had some issues and after pit stop there was only 5sec gap between us. @Alex Salmon was also several seconds behind and then i caught Manu, he was closing on both of us. Unfortunately i was not able to make a pass for the first place and spun while trying (1:27:30). Fortunately Alex managed to stay in 2nd exactly for 2 corners and spun

There was so many crashes in the race, radio was full of warnings.. There is lots of new guys and i try to be extra cautious about them as i don't know them. But there was also incidents with veterans, like @Blue Monkey and @PatatorJohn (47:26), i mean trying to go side by side to Eau rouge? You both have huge egos


Feel sorry for @Puffpirat it's so frustrating to skip a race that you had so many chances of winning.

Looking forward for upcoming races!
You must log in or register to reply here.