Ok. I will be ready!

I'm sorry I won't be able to attend today, unfortunately one of those unforeseen circumstances at work and won't get there in time.

Please allow a reserve driver to enjoy the race

Orange Zone Investigation from round 1 is now live: https://revolutionsimracing.com/threads/evolution-series-s2-r1-okayama-23rd-april-2019.2041/

Post automatically merged: Apr 30, 2019
Any of the reserve drivers available to race 2?

Post automatically merged: Apr 30, 2019
Any of the reserve drivers available to race 2?

I was planning on being available to race tonight but our daughter is quite sick. Hope you guys have a good one.
​

A few laps of me doing some practice for tonight..

Was looking forward to this, now pulling out. Sorry guys for the late notice but been running around to make sure I can make it and I haven't.

The final conclusion of tonight: Finns wins
At least when the races arent more than 1 lap 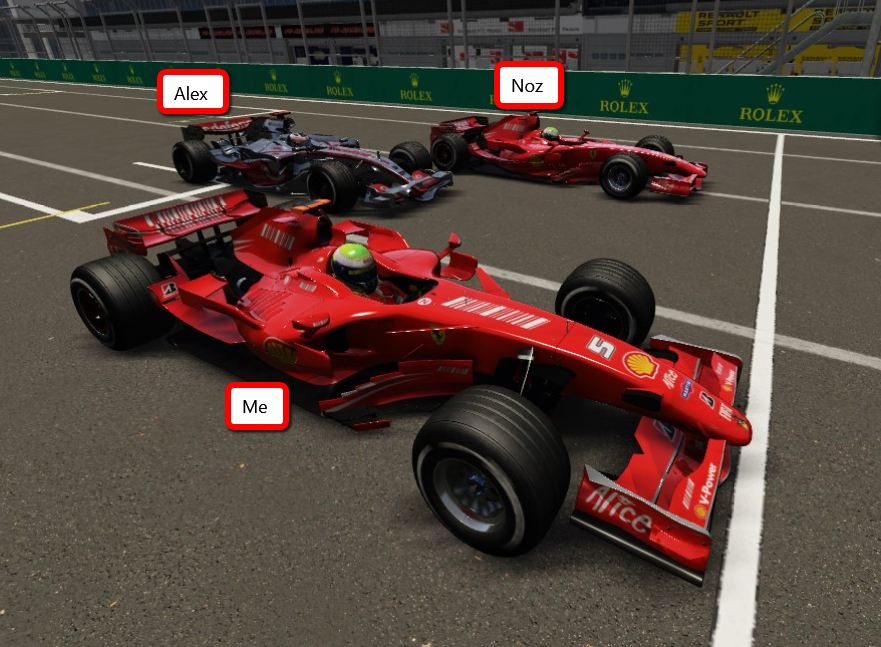 Disclaimer: This is not to blame anyone

Disappointing night for me tbh. Was really looking forward to the 2nd round and practiced quite a lot for that to be competitive and have 2 good races... But yeah, like everybody witnessed, racing was not possible yesterday...
Would be nice if we could use more official content or mods with a suitable quality that something like this does not happen again. But racing with more than 30 people on a mod track nobody has ever used before, you know it was just a matter of time until something like yesterday happens.
I agree that it is boring to just race on the official tracks like Spa and Monza, so it is good to use mod tracks to make the seasons more interesting. And there are a lot of tracks which are good to use and have almost Kunos quality like Tor Poznan, Chang Circuit, Okayama, Oulton Park and so on.

We need a roster of mod tracks which were tested in other seasons or test races with more than 20 people and which are good to usw. New mod tracks could be used in test races to see how their quality is and when they proof that the quality is alright they are going into the roster.
And quality for me is more than just fps or CPU performance. I was driving the Belle Isle Circuit yesterday the first time and tbh I was shocked how bad the physical road mesh is and that this track made it into the season. There are actually zero point zero bumps (never seen that on a street circuit) and also there is zero road noise. I don't wanna talk about the graphics, but I would not even use this track for offline single player races...

So conclusion, would be awesome if we could use official content more or mods with proven quality and not going into a season were a lot of preparation and time has already been use just to find an 'easter egg' like yesterday.

@Noztra @t0daY, sorry i was not available last night, i'll be honest i got my weeks mixed up thinking the race was next week, no excuse though!

Extrovert said:
@Noztra @t0daY, sorry i was not available last night, i'll be honest i got my weeks mixed up thinking the race was next week, no excuse though!
Click to expand...

We could not race anyway, so lucky you - Race will be held in the end of the season. We will release shortly more news about when, where, how and why
Strangers become friends and friends become family #RSR
My Rig: Fanatec CSW 2.5, ClubSport Steering Wheel Formula V2, ClubSport Pedals V3
My PC: i7 6700k, 16GB DDR4 RAM, MSI 1080ti, 500GB SSD, Windows 10
Wheel Stand: GT1 Evo Sim Racing Cockpit by SimLabs

t0daY said:
We could not race anyway, so lucky you - Race will be held in the end of the season. We will release shortly more news about when, where, how and why
Click to expand...

Awesome for me I guess, not so for the missed race! I presumed something how gone awol from Excited's post. I'll keep an eye out for updates... cheers
You must log in or register to reply here.