Really enjoyed the race last night! Very intense driving into the night, and like @SBart_uk, I can't believe @The Wayfaerer was able to drive at all without headlights, the track was pitch black! It's one of the things I really appreciate about SMS games, the ambient light is spot on. If you're racing at night at a track that's close to a city or with decent lighting, even in dark sections you'll get quite a bit of ambient light so the track never gets completely dark. Out in the sticks though, it's a completely different story.

Completely agree that the ZX-GTP is OP for that class. If you look at the stats of the Group C cars, most of them seem to have similar power/weight. The ZX-GTP and one other car (can't remember which) kind of stick out like a sore thumb for being quite different. Maybe if we had another Group C race we could agree not to use those two cars? The ZX-GTP makes the other cars in the class redundant really and I'm not at all convinced that's track specific.

SharkyOB said:
Completely agree that the ZX-GTP is OP for that class. If you look at the stats of the Group C cars, most of them seem to have similar power/weight. The ZX-GTP and one other car (can't remember which) kind of stick out like a sore thumb for being quite different. Maybe if we had another Group C race we could agree not to use those two cars? The ZX-GTP makes the other cars in the class redundant really and I'm not at all convinced that's track specific.
Click to expand... 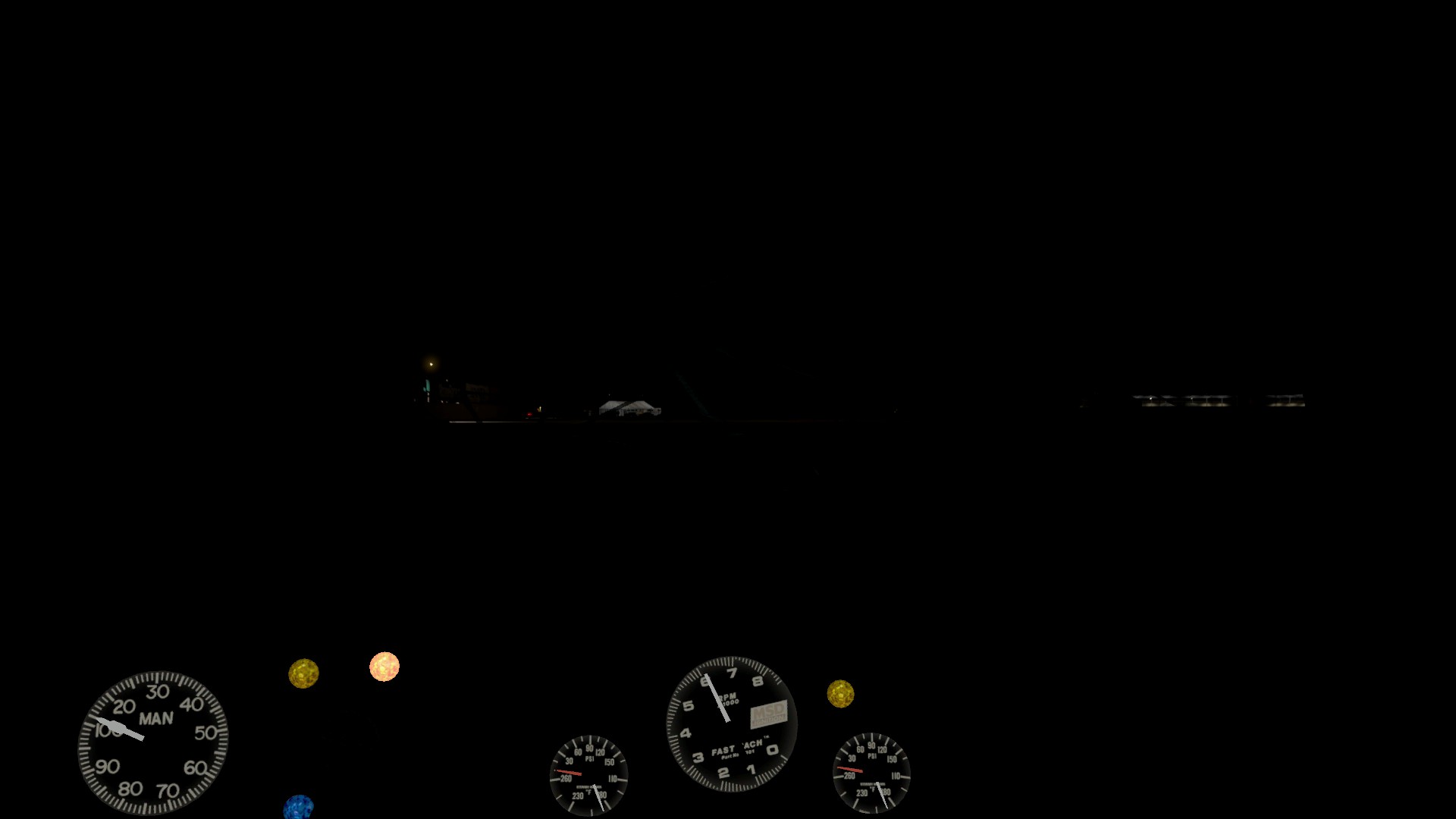 That's how it looked like from my perspective driving it without headlights coming out of Corbs. I had to drive the car just with the minimap and with the memory of the track in my imagination. The cracked windscreen didn't improve the visibility either
That was probably the craziest and scariest moment in my entire RSR career

After the Hangar Straight driving without lights was quite doable as there were tracklights at every corner after that.

@SBart_uk that battle with you was quite fun, i tried to do the undercut on you as you had much better pace at this point with the hards that weren't that near to dying as the softs i had.

SillySausage said:
Well that was a tough race. My second RSR class win ever and my first in PCars 2!
...
Unfortunately Ashnoom and Laiders both had problems during the race who both had good pace which gifted me the lead.
...
Click to expand...

So, yeah. I was very happy with my pole position. Did not expect it before the qualifying started. As during practice I was around 1.34-ish. During qualifying I managed a 1.32.3-ish or something. And, if @MelBonkers 's AI did not try to overtake me in the first corner of the last lap during qualifying I would have been able to manage a 1.31.9 (Crossed the S/F line at 0 seconds remaining, so I could just do one more lap, Hamilton style!)

Had a blast of a race, around the 30 minutes mark I saw that I had 61 liters left, where I started with 119. My front left was halfway gone and I started to notice this due to some corners becoming hard to take and spinning two laps in a row, and clean laps would be around 1s - 2s slower than fastest lap. I spun in after the chicane on the S/F-straight, ended up 90degrees half on the grass/track on the outside. Saw nobody coming, tried to put myself straight again, then noticed a group-C coming, immediately tried to come to a halt, but it was too late. Got T-boned, and 2 seconds, or multiple spins, flips and salto's later I found myself upside down.

Due to the new ICM menu I had to unbind some keys. One key I unbound was the reset key, because I have never ever had to use it in pCars1. Alas, I had to use it now but I couldn't. Race over, I packed up my things and went to do other stuff around the house.

Regardless of that crash I had a wonderful race. I completely felt the pressure from Laiders, especially the first 10-15 minutes. After that he dropped back 10-20 seconds or so, so I could relieve myself of some of the pressure. It felt quite exciting every time I saw a group C car coming, will it be safe, will it go well, wont I hinder him too much, will he keep me alive. And once the darkness fell it became really dark which made seeing some corners quite difficult, especially due to some corners having no more bollards, meaning no more reflection.

Invincible said:
Which other car? There are only the C9, the XJ9, the 962 and the R89C left - everyone of those comes in a high df and a low df (Le Mans) spec. But none of them sticks out in terms of power or weights.
Click to expand...

I'll check when I get home, stuck in stupid work and there's no VR here at all

It's possible I was hallucinating but I was sure there was one other car that didn't look consistent with the others.

Edit - I'm fairly sure the Le Mans specs make no difference at all, they just there so that SMS could use the correct liveries.

SharkyOB said:
Edit - I'm fairly sure the Le Mans specs make no difference at all, they just there so that SMS could use the correct liveries.
Click to expand...

Oh, I remember reading something on the WMD forum stating they weren't different, I'll have to try hunting it down. Sure it was from one of the devs.

Spectating with the Director controls was pretty fun. You can get a rough overview of what's going on with the standings pane, but a full live timing page and labelled circuit map on a 2nd screen would be handy for following what's going on.
About RSR | General Conduct | Driving Standards​

That was 1 of the worse races for me. For some reason i really struggled during the race even though i was fairly happy with my setup.

Quali I managed a low 1:06 which i was happy with except it put me in 4th.

Race was a completely different story. I had slow start then i followed @SBart_uk off the track onto the grass. I rejoined around 6th and started to settle into the race. For some reason i was given a drive through penalty for no reason. Later in the race i had to pit for fresh tires, I set my pit stop strategy during formation lap and tested in practice. but during the race the pit stop didn't work correctly, I entered the pits with front damage and worn tires and left with worn tires and front damage. I had to do anther pit stop 1 lap later which worked correctly. Several laps later i locked my front right brake into T1, and hit the wall and sustained a fair amount of damage. At that point there was no point continuing as i was already a lap down on ImJakey who was the next driver in front of me, that combined with a long long pit stop for repairs i decided to park it, this isnt something i would normally do but with the long repair length there was no point.

I completely agree with @Blue Monkey , this race was a really bad experience for me,

I can relate to the seriously short headlight distance for the group C GTP, it made it difficult to judge my braking point. I too had the penalty issues, pit stop issues and the group As were just a little to slow for it to work well. Classic GTE would have been a good alternative.

But this race is done, now i will test for Sundays race but i may decide to focus more on the league due to suffering from a cold so not feeling 100%
Last edited: Sep 29, 2017
RSRs most wanted: . Have you seen them?

Invincible said:
Then something with your setup was iffy. For me the car was in rails and I could mostly floor it out of the slowest corner in 2nd gear. (At a modest steering angle)

The 3rd gear corners were just flat out right from the apex.
Click to expand...

You probably just like your cars to be stable/understeery. Mine was keeping me a bit honest through most corners on the power.
Last edited: Sep 29, 2017

w0rthy said:
You probably just like your cars to be stable/understeery. Mine was keeping me a bit honest through most corners on the power.
Click to expand...