yeah i think that too, i will be on again tonight to play around with the pressures, as i won't have time tomorrow.

true, deciding shortly before quali should be also ok

Had a good session of practice tonight. I was able to get down to a 38.2 and I am now doing high 38s/low39s almost every lap at the beginning of the stint.

Lowered the radiator setting from 3 to 1 as the engine temps were extremely low.

PS: seems like our car has now a chrome dashboard 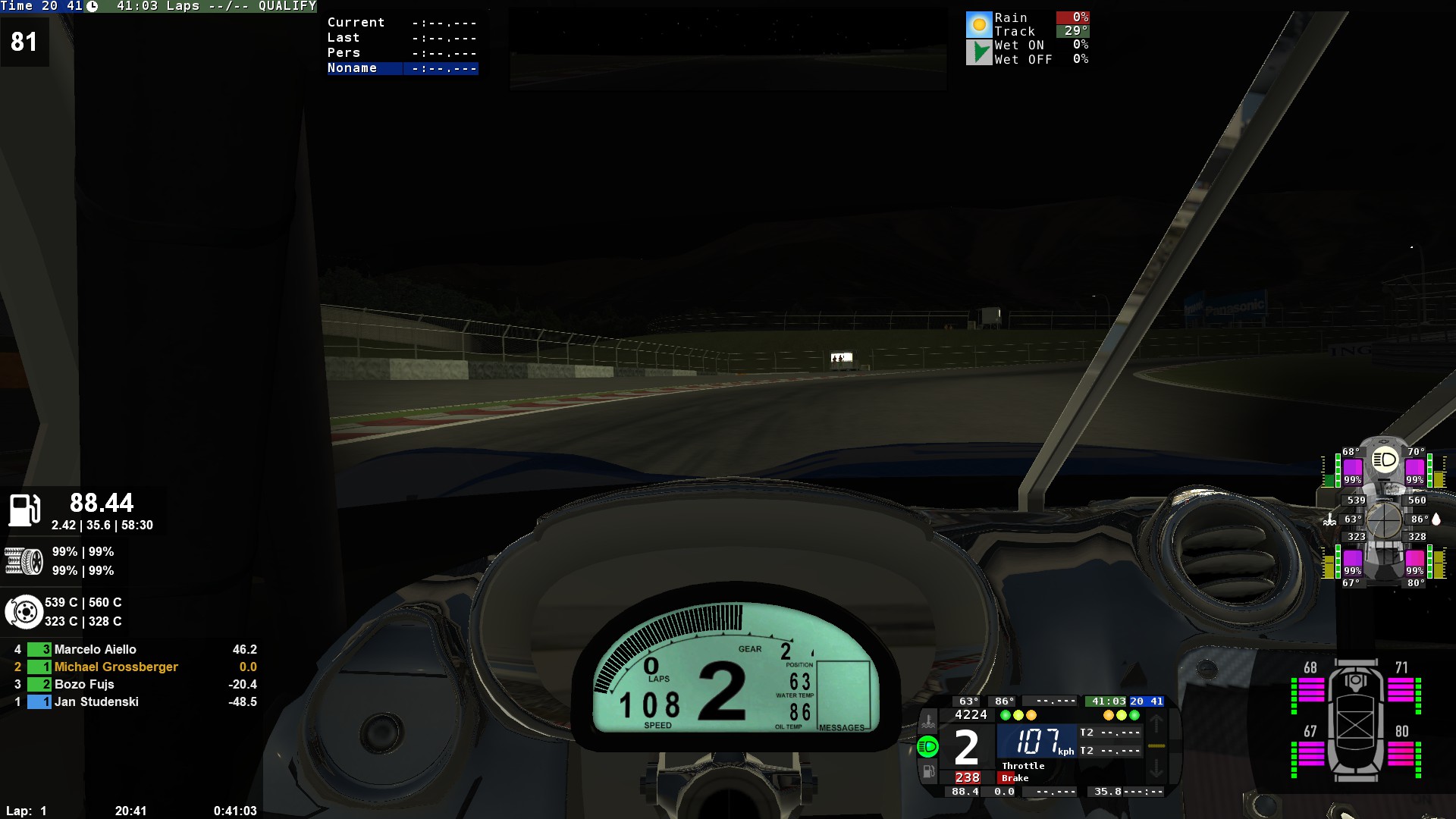 Neat, did you change anything else? Different pressures etc.

It looks like it's going to be a mostly wet race. I'll do some wet running tomorrow to see what we'll need to tweak.
About RSR | General Conduct | Driving Standards​
B

Battenberg said:
Neat, did you change anything else? Different pressures etc.

It looks like it's going to be a mostly wet race. I'll do some wet running tomorrow to see what we'll need to tweak.
Click to expand...

Oh yeah - 90% rain probability now
@The Wayfaerer Weird when I checked it showed me dry, must have been an error. Sorry.

yeah i forgot that, was testing out different tire pressures, but i was most comfortable and also fastest with 135, with higher pressures i was faster in sector 1, but the car was more unstable so i lost about double the time gained in S2 and S3
B

Battenberg said:
Slippery track, spray at night, dive bombing P2s... It's going to be a loooong 4 hours
Click to expand...

I could imagine there will be more collisions than in Indianapolis ...
They gonna increase the penalties and probably start excluding people

The Wayfaerer said:
yeah i forgot that, was testing out different tire pressures, but i was most comfortable and also fastest with 135, with higher pressures i was faster in sector 1, but the car was more unstable so i lost about double the time gained in S2 and S3
Click to expand...

I found the same, it's a bit funky that we're using the minimum all the time. I guess that's what we get for doing the rest of the setup first, and set pressures last. I think we can use the current setup as a safety, I'll try and start from scratch tomorrow and see whats possible with higher pressures from the start. For science.
About RSR | General Conduct | Driving Standards​

@The Wayfaerer I tried our dry setup in the rain, and it doesn't work The main problem I found was low speed manoeuvrability, it felt too stiff and locked up mid corner. I started to put together a wet only setup with softer suspension all around and less diff preload and immediately saved 1.5 seconds. I'll keep at it tomorrow morning, we should have something drivable in place by the time the server goes up (open practice starts at 13:00 UTC).
About RSR | General Conduct | Driving Standards​

Car is feeling much better now, I've pretty much softened everything. My main concern now is tyre wear. I've only done short runs so far, but I think running minimum pressures can't be good for tyre life. I'm gonna try using more pressure to see what it's like over a longer run. Judging from the practice times now, we're solid midfielders.
About RSR | General Conduct | Driving Standards​

Ok, i will be on in about 45 mins to help you with final adjustments
Yeah i also thought that tire wear might be a problem, especially in the wet

Statement Race 2:
"It seems like lady luck is still not on our side although the race was starting far better than expected with the crazy strategy to start on wets although the track was purely dry. This was caused by a server failure shortly before the race and the track conditions weren't the same as in Qualy and Warm-Up.

@Battenberg did a massive job keeping our Viper on the top spot for about half an hour. I was able to take over the car shortly after the 1 hour mark on P2. During my stint i dropped down to P4 as the clearly faster teams were catching up. At the end of my stint i retook P2 as the other teams were slightly of sequence.

But then bad luck striked again. Again blew out of nowhere as i braked a bit earlier for T1 because i wanted to avoid a spining LMP2 car. We were really gutted because everything was going so good and we really had the chance to be a huge surprise in that race.

I hope the #99 squad will have a better race in Istanbul as i am not able to join for that one, but i will be back fully motivated for Round 4 at beautiful Suzuka."

@Battenberg as Wayfaerer not around for this next race at Istanbul, are you around to start getting some practice going on an evening?
Not enough time racing.

Yeah sure, how about Saturday? I'll also do a bit before the race tonight.
About RSR | General Conduct | Driving Standards​

Yeah I should be around on Saturday evening, to be fair I am on most evenings, but if you see me on just give me a shout if you are around.
Not enough time racing.

Steward report for the Istanbul race is online, again no penalties for #99

I am pleased to hear that as we did have a very clean race. Just need to find the extra speed this car must have, i noticed from the VEC in viper it is winning a lot of the class.
Not enough time racing.

I've done my first real practice today for the race next week. I also figured out a pretty nice base setup where I am only about a second slower than the top times. I was taking the Istanbul race setup as a base and decreased DF a bit and worked a bit on the Diff, i haven't done any changes to the suspension, but if necessary we can do that in a practice session together.

I will upload my current setup to the resources area so you can access it anytime. 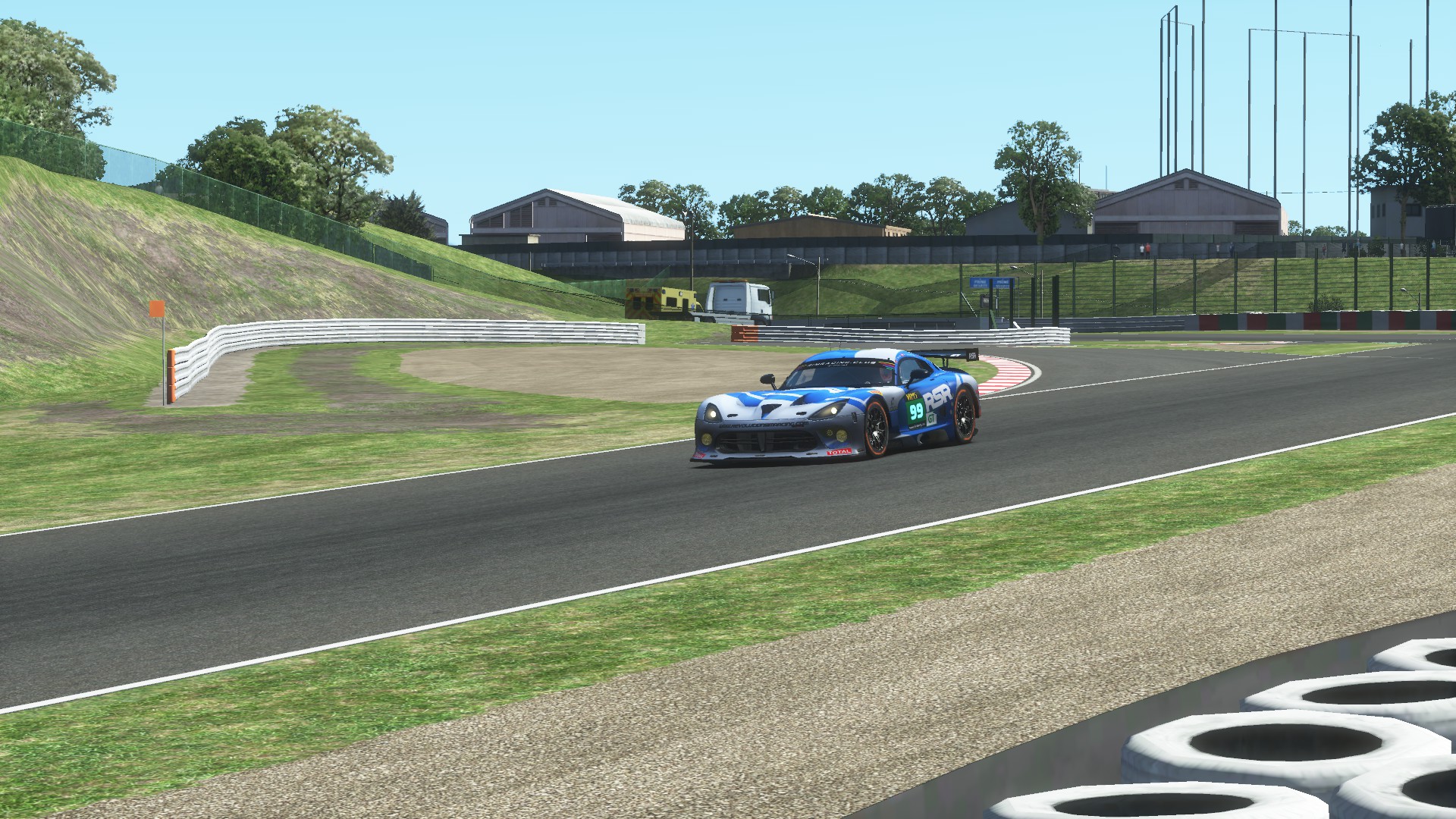 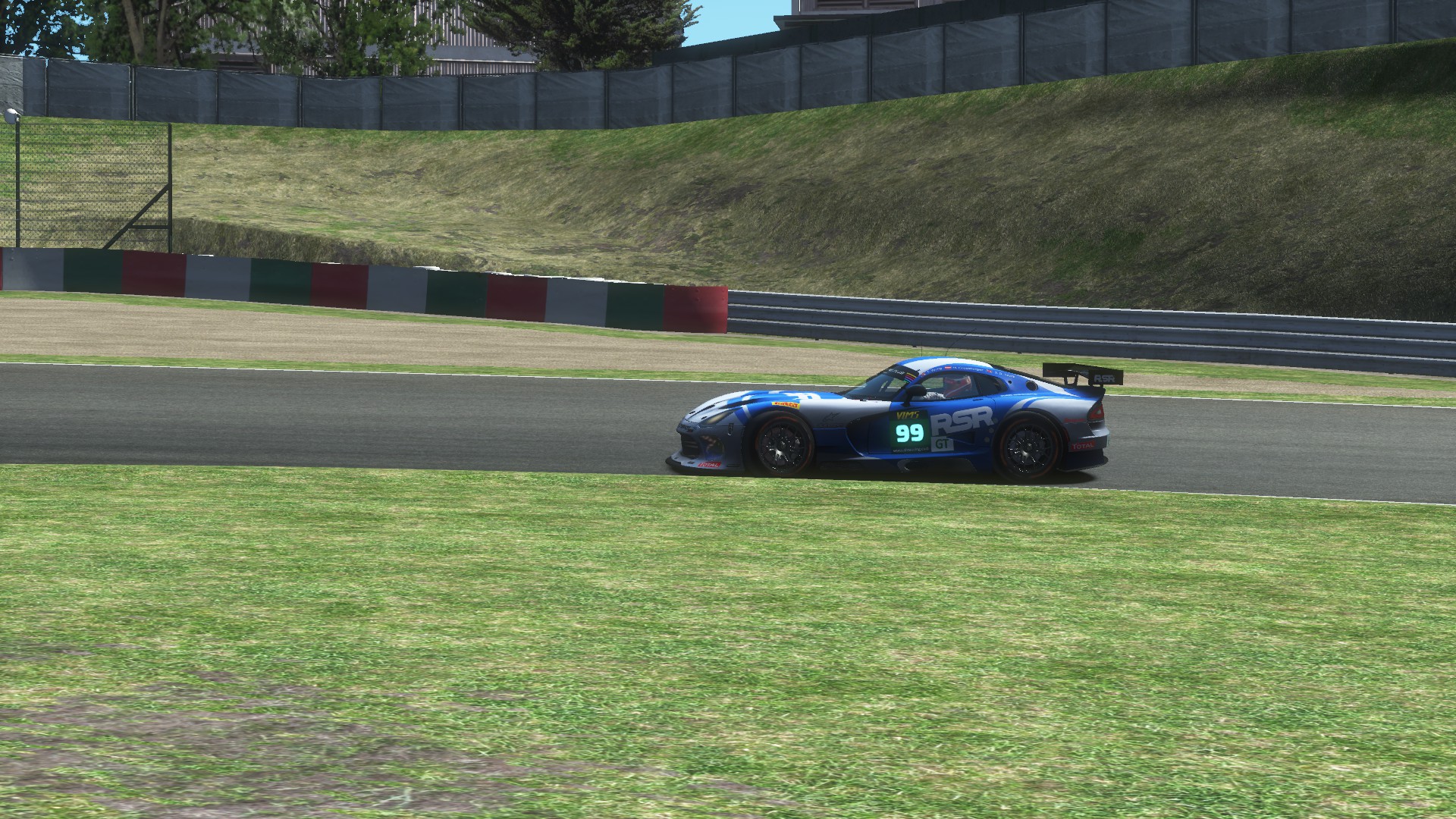 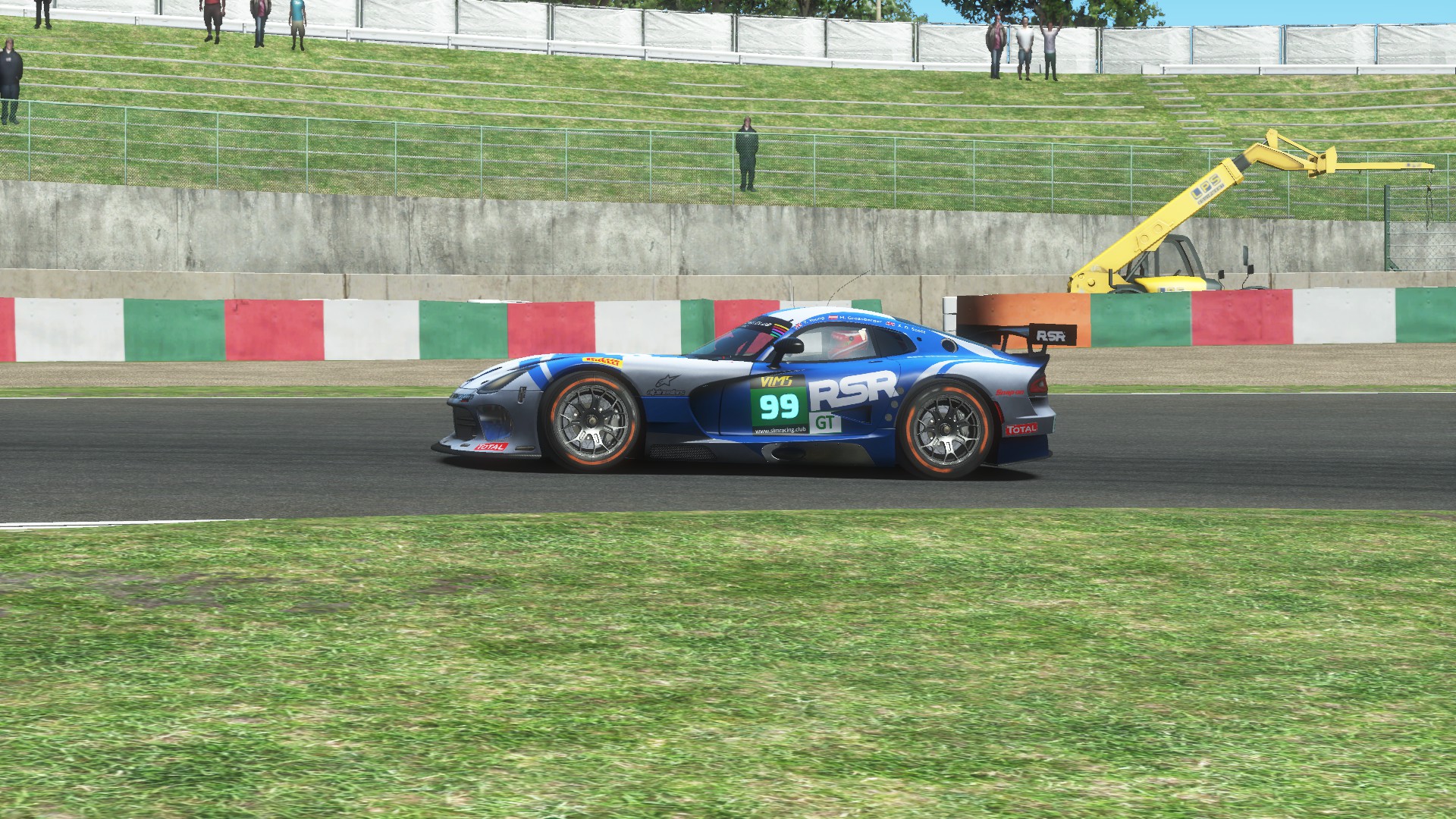