falcon2081 said:
@SlowBloke check out the iRacing forum and in the Hardware section go download a program called irFFB. Will improve the FFB quite a bit.
Click to expand...

Any tips on recommended settings in irFFB by chance ?

I did find a video but the irFFB version seems outdated as there are more sliders now.

Currently trying below - the Max Force is too light for the MX5 but better for the R18 .... 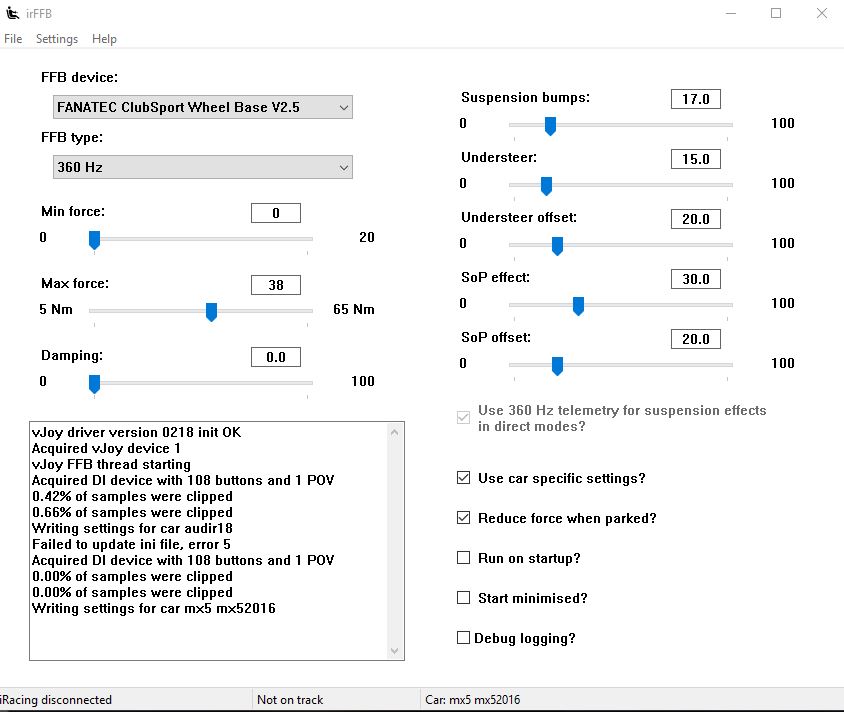 @SlowBloke No sorry no tips. I've never used the program. You could always post in the thread and ask for help there.
Setup: SimLabs P1 80/20, OSW Large MiGE, Heusinkveld Pro Pedals, Fanatec Rims with SRM adapter. Triple Dell S2716DG Gsync with Telemetry Monitor. Fanatec Shifter.
Beast PC with 2080super to run it all.

Is 2019 season 2 starting next week ? I know where to get the schedule for Season 1 but dont see season 2 published yet ?

Getting out of rookie was simple enough ... just a few races and boom..

However now I want to see what tracks / cars I need to get next. Im hoping the F3 will be featured for D as that seems to be the nicest "slower" single seater to drive - I like the F3.5 but that is probably a bit too fast for D and will just result in pile ups..

Id buy the Ferrari GT3 but dont know if that will be featured next season...

I could race a few laps in the free Cadillac but honestly that thing kinda sucks (to me)....

Also are there beta patch notes / development info we can follow ? I cant find anything on the forums.

@SlowBloke
next week is week 13, this is mostly a fun week where everybody lets off steam after the 12 weeks of competition with only a few official series, so in the fun series SR and iR is not in effect
there are also often fun series for the new content
new season starts the week after
Schedule for next season should be available sometime during week 13

The Wayfaerer said:
@SlowBloke
next week is week 13, this is mostly a fun week where everybody lets off steam after the 12 weeks of competition with only a few official series, so in the fun series SR and iR is not in effect
there are also often fun series for the new content
new season starts the week after
Schedule for next season should be available sometime during week 13
Click to expand...

http://members.iracing.com/jforum/posts/downloadAttach/2529294.page next season's schedule although its full of errors atm

Corbs said:
http://members.iracing.com/jforum/posts/downloadAttach/2529294.page next season's schedule although its full of errors atm
Click to expand...

fab. ICEMAN said:
It's down for me
Click to expand...

i think for the beginning you are better off with maybe focusing on 2 series or so, and just buy the content you need to get the 8 races per season done, so you get participation credits back, that's what i have done and through that I was able to save a bit of money at the beginning

Yes, it's best to focus on 1-2 series. GT3, IMSA and iLMS nearly always go official and are at the most used tracks. It's expensive but 2 cars and 8-9 tracks should be enough to earn yourself some money back to get a free track / car next season

Post automatically merged: Mar 1, 2019
I've quickly looked at the schedules for iLMS, IMSA and GT3.. Let's say GT3 is worthless this season with quite a bunch of low-tier tracks.
So you can go the cheap route this season with just the GTE if you have C licence and get B licence within a week.
I've listed the most popular tracks that will get you enough participation credits if you complete atleast 1 official race each week, although that counts on you having B licence in week 1 of the upcoming season. 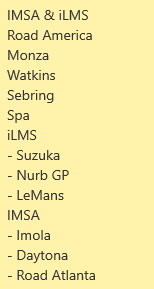 Also bought the Ferrari GT3 to see how I like it - I like the GTE very much around the Nordschleife.

Dutchtastic said:
Slow doesn't matter in Endurance events. Last year at Spa we were in 2nd split, last car out of the bunch being off-pace from quite a few teams. Still ended up on top of most of them by just keeping it out of the walls. Was going to say clean, but over 1.2k offtracks doesn't make it clean
Click to expand...

My mouth is filling with saliva...
Racecar backwards is still racecar.
Racecar upside-down is very expensive.

the braking on the M8 is weird you press brake nothing happen then all of a sudden it happens haha
If in doubt...Go flat out - Colin Mcrae

There is something wrong with the brakes on the M8. Brake balance is set all the way back, and I still lock the fronts.
Racecar backwards is still racecar.
Racecar upside-down is very expensive.

Dutchtastic said:
Not 100% sure what is up with it, but it's quite unrealistic
Might see a patch out soon
Click to expand...

tomorrow
You must log in or register to reply here.